COLUMN: Why objectivity in journalism does more harm than good to marginalized communities

After weeks of political unrest on a national and local scale, objectivity in journalism has once again become the forefront of discussion. 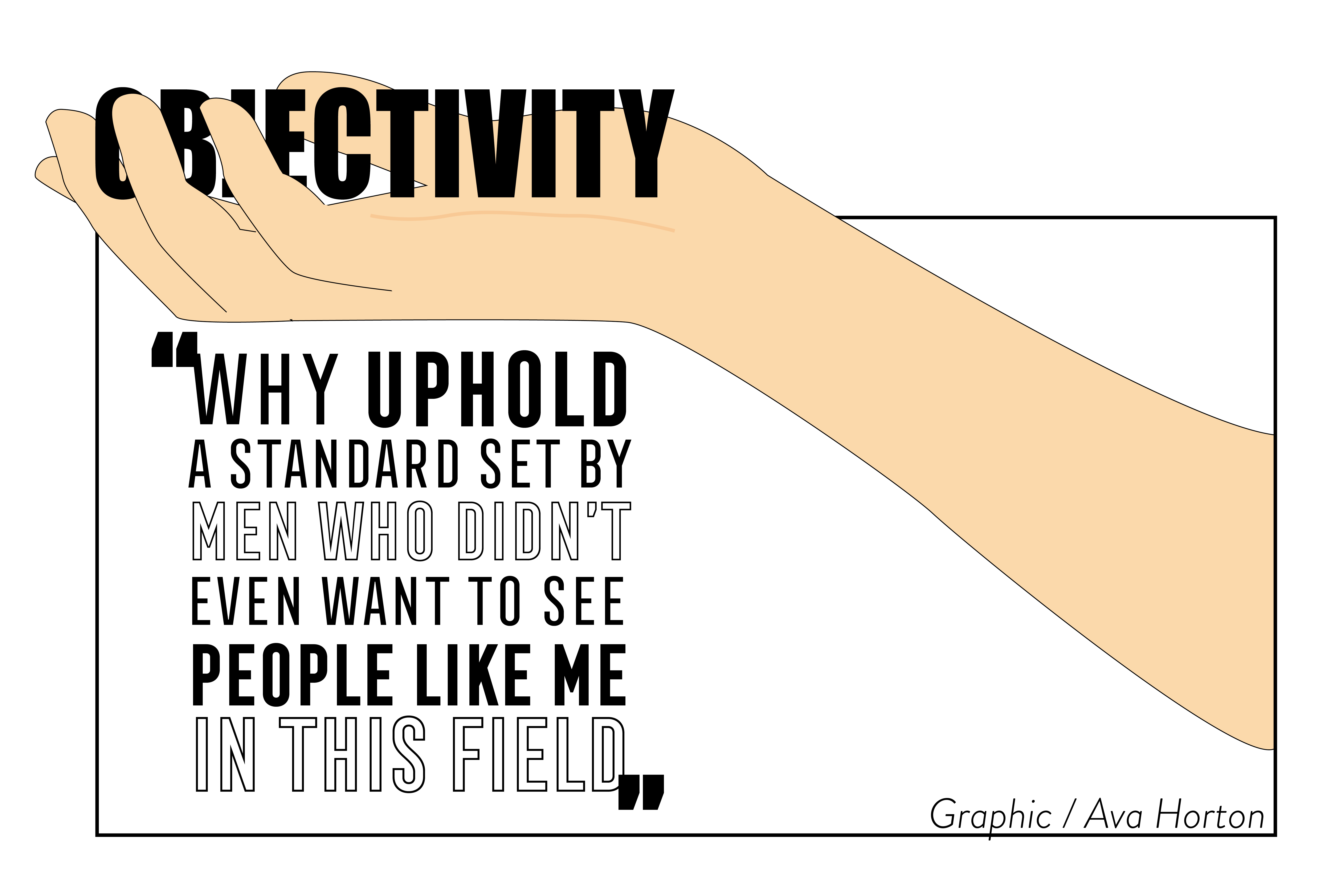 To fix this issue, a bunch of old white guys decided, ‘Hey! We need to set some standards for journalism so we can be taken seriously.’ Thus, objectivity (amongst many other things) was born. They defined objectivity in journalism as reporting without bias and making sure to represent both sides of an issue fairly.

Over time, an ‘expert’ approach to journalism emerged where some people believed you had to have certain qualifications and training in order to understand and uphold journalism standards, such as objectivity.

Therein lies the first issue with objectivity. Even in its (very simplified, I will admit) origins, objectivity has always been something inaccessible to a lot of people. The standards for journalism were created with rich white men who could afford an education in mind. And in today’s world, this mentality simply won’t make the cut.

In today’s world, I would hope we all have a little more understanding of this big idea I like to call ‘systemic racism.’ For those who don’t know, systemic racism explicitly states that all ‘systems’ in America such as housing, jobs, education, etc. are all biased against people of color.

People of color have always had the short end of the education system's stick. Black Americans were legally kept out of "white" schools until the late 1900s, and we still see the effects of this today. Talented young Black kids don’t have access to top-grade education because of something white people tend to think we resolved years ago.

The education system holding people of color back from top-grade education means many people who look like me will never have the opportunity to study and learn how to use objectivity. Therefore, objectivity as a whole becomes inaccessible and racially biased towards white people.

So, I must ask, why uphold a standard set by men who didn’t even want to see people like me in this field?

The answer is: we shouldn’t. In this modern society, the lines between the oppressor and the oppressed are clearer than ever. Simply put, in most situations, there is a right and a wrong, and sometimes not making a choice is choosing the wrong side.

To clarify, I am not saying to lose the reporting aspect of our jobs. We should always seek to inform. However, sometimes siding with the people is as simple as word choice.

In an extreme example, last summer I watched in horror on social media as Derek Chauvin forced his knee on George Floyd’s neck for almost nine minutes. Through video evidence, I saw a murder happen right before my eyes.

Instead of news outlets supporting Black people during that traumatic experience by at least calling it murder by name, news outlets went for less biased words like "incident" or "alleged" when I saw it right in front of my face.

That was a big slap in the face because news outlets were telling my community that what we saw was a lie. We didn’t see a murder, we saw an ‘incident,’ and that only made a cruel summer even worse.

The second issue with objectivity is the sense of privilege it accompanies. For people of color and marginalized communities, we don’t get to strip ourselves of these identities for the news. No matter if the story runs, at the end of the day, I am still a Black, queer person living in America who faces the threats reported during the news in my daily life.

To be objective about that is to have the privilege to say, ‘I can take a step back from this’ when others do not have that luxury. So when journalists preach objectivity, they need to check their privilege, because some of us can’t be objective when our wellbeing is at stake.

On the other side of the argument, some journalists argue that without objectivity, there is no difference between a journalist and a common person, because journalism loses its standards.

I don’t think there should be a difference. The only difference between a journalist and a common person is a couple journalism classes and a platform.

To even assume there is a difference makes journalism pretentious, and once again inhibits us from doing our primary jobs: representing the people. Doing away with objectivity puts journalists and average citizens on a level playing field, which is more important than upholding outdated journalism standards.

When it comes to objectivity, journalists need to decide what side of history they want to be on. In 20 years, when history books recount the events of the past few years, I can sleep peacefully knowing I stood with my people against all odds. For those who so vehemently uphold objectivity, can you say the same?